Where is our tuktuk member driving.? 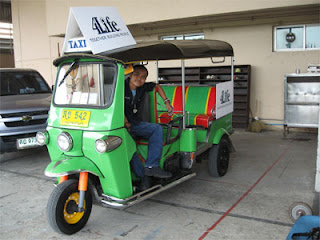 Do you know where is our tuktuk member .

Wow.. it's nearly around the world.

please take a photo of you and your tuktuk and sending us
to joining the tuktuk club and activity.In the future,
We would set up a meeting for our club.

Below is our some our tuktuk parking.

South Pacific : New Zealand and Fiji
Posted by tuk tuk Lover Club at 6:28 AM No comments:

Wow... Amazing tuktuk car racing online game.
It's freeware from thai programmer Mr.Thasawat Thongsuk
Every player can select tutkuk model for beating in the virture gameas a real tuktuk racing on the road in bangkok area.At the start point,Every player must try to drive a tuktuk as fast as possible to be the winner in the tuktuk racing.It's very fun for tuktuk lover.Well..This game got the first prize from The National Software Contest 2003(NSC)in thailand.

Theme : Welcomes you to an enchanted journey back to the past of Bangkok, the capital city of the Rattanakosin era, the rich heritage of Thailand from the reign of King Rama I untill the present monarch, King Rama IX.

A recorded narrative : Offers you the accurate and informative while riding along this remarkable area-Telling the old day stories-historic landmarks, sites, religion and Thais' spirit.

Cultural excursion : Exclusive riding on a Tuk-Tuk, a 3 wheels vehicle, the symbol of Bangkok Transportation. Our drivers are approved by the tourist police.

Lunch and personal expenses such as drinks, tips.
Dress code:

Visitors must dress modestly and properly in keeping with the dignity of the religious places.
It is one of the most impressive ways of tracing the outline of the history of this enchanting Kingdom. Bangkok Tuk-Tuk hopes the experience of this special designed package is one you will treasure for a lifetime.

is one of Thailand's endearing symbols and a home-grown product that developed from the samlors and rickshaws of yesteryear. A wealthy Chinese resident probably brought the very first rickshaw to Bangkok in 1871. The innovation quickly caught on and became so popular that by 1901 the government was forced to limit the numbers of rickshaws in the interests of public safety. The samlor-a bicycle powered pedicab, later took over from the rickshaw but this too was outlawed in Bangkok in the late 1950s as being a traffic hazard. Samlors are still very common in many provinces.

The motorized tuk-tuk brought the solution to Bangkok's transport need around 1960. Safe, stable and yet open, allowing a free passage of air, the tuk-tuk has become
a symbol of Bangkok. The modern-day tuk-tuks are environment-friendly, running on 4-stroke, 250 cc LPG or CNG engines. They are designed to seat up to three passengers with additional space for baggage, but very often many more than this will squeeze into the back. Manufactured in Thailand, tuk-tuks are now exported to many countries worldwide.

From : www.hotelthailand.com
Posted by tuk tuk Lover Club at 8:00 AM No comments:

If just for the heck of it, take a tuk-tuk ride.

One thing that makes Thailand unique is the tuk-tuk, a three-wheeled motorized vehicle. It can be found on almost any road in the capital.

Tuk-tuk is a symbol of Thai ingenuity. It is a modification of a Japanese delivery vehicle popular in the country during the 1960s. It has become popular and it is now being exported abroad. Tuk-tuk has made its presence even in far away Kenya, in Africa, where it has become a cheap mode of transportation. There, the vehicle is also known as tuk-tuk, a Thai coinage taken from the chugging sound of the vehicle.

It is also a symbol of Thai artistry. Although the make is similar, tuk-tuks are adorned and painted in the many differdnt ways and colours. The colourfull tuk-tuk has in fact become a tourist attraction in itself because of its novelty.

In the provinces, the tuk-tuk is the most popular means of transport. They operate like taxis, although without any meter. They are occasionally faster than ordinary taxis in heavy traffic because they can easily wave in and out a jam.

Without any luggage, three people can fit into a tuk-tuk quite comfortably, It's possible to fit more in but it gets a bit cramped.

Tuk-tuk fares always have to be bargained for and it is sometimes possible to bargain down to less than the taxi flagfall of Bt35. Most of the times, however, they offer no savings over a taxi, except if you're not good at bargaining and can speak good Thai.

The initial price tuk-tuk drivers quote is likely well over the going rate, but it's easy to bargain it down to a more reasonable one if you roughly know the equivalent taxi fare.

It's essential to bargain the price with tuk-tuks before getting it. If you only ask after the ride, it's likely to end in a request for an outrageous fare which can obviously lead to an unpleasant situation.

Just like taxi drivers, tuk-tuk drivers mostly come from the province and have had no training, sometimes have no idea about the place you want to go.

A subtle point to remember when riding a tuk-tuk is not to rest your feet on the rail near the driver's head. Doing so is very respectful towards the driver.

As tuk-tuks are open-ended, they expose passengers to the high pollution levels in the middle of Bangkok's roads and offer almost no protection in case of accident.

If just for the heck of it, taking a tuk-tuk is fun. It's like traviling around town on a convertible.

From : www.hotelthailand.com
Posted by tuk tuk Lover Club at 7:50 AM No comments: 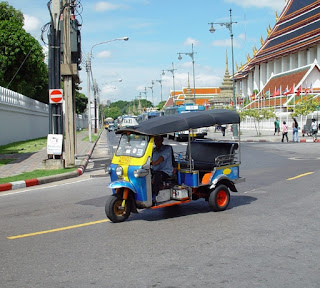